A Surprising Lack of Opinions... 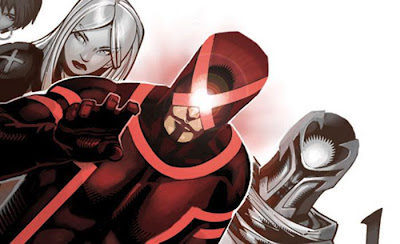 The title of this post is specific to this post, but also sort of reflects the fact that I created a blog and then never used it. See how I did that? I am one clever motherfucker, y'all had better get used to that.

So some decent, non-Quesada images of Cyclops in his Marvel NOW! costume have hit the interwebs, and the costume is causing people to feel feelings. Rage feelings. The kind of feelings that spawn Epic Nerd Hyperbole like "Marvel is destroying my childhood!" And, well... I'm kind of surprised that I'm just rolling with it. I actually think it's kind of a dope outfit for Cyclops to wear. I'm surprised by this because usually I am the first one to get ultra-grumpy when they put kneepads on Superman (WUT) or take the little wings off the sides of Captain America's head (NO). I'm a guy who gets slightly distracted when Spider-Man has his armpit-webs in one series but doesn't in another (for the record, I am pro-armpit-webs), so - and this may be sad but fuck you for judging me - I actually found myself lying in bed this morning wondering why I'm so okay with a superhero getting such a radical makeover. And I figured that means I'd better blog about it.

Now, I know a lot of my friends will just jump to the "because Cyclops is boring and stupid" conclusion, but I can't accept that one. The truth is, I've always actually liked the dude, despite years of movies, cartoons, comics, and basically nerd-culture-at-large telling me that I'm supposed to be rooting for Wolverine and viewing Cyclops as the stuffy jerk. And I mean, he IS a stuffy jerk... But he's also a dude with extraordinarily low self-esteem, who leads a team full of people with extraordinarily low self-esteem, and constantly has HIS boss - a dude who ALSO has extraordinarily low self-esteem - barking orders inside his brain while he's trying to lead on the ground... and that shit right there is interesting to me. During Matt Fraction's painfully short stint on Uncanny X-Men, there was a scene where Madelyne Pryor, Cyclops' thought-to-be-dead ex-wife, launches a major psychic assault against him; When his current-girlfriend Emma Frost rescues him from psychic torture, his only response is "Please. I have bigger nervous breakdowns for breakfast." And he makes you believe that, and I think it's GREAT. So no, it's not because I write Cyclops off as boring and stupid.

No, I realized as I was lying around dorkily pondering shit that clearly has no practical impact on my life, the actual reason is a little deeper. I'm sure this has been pointed out and pondered by many of the fine folks who draw superheroes for a living, but it's genuinely a thought that's never occurred to me before: The X-Men don't actually have any sort of consistent costumes. I don't know why I never realized this in the past. The reason I will get so pissy about changes to Superman or Captain America or Spider-Man is that I always feel like they're messing around with something iconic... whereas The X-Men are arguably more popular than any of those guys and they aren't iconic at all. They change their super-suits at least every couple of years. In fact, if you count the Phoenixed-Out costume he was sporting for a few months, Cyclops has had three different costumes in 2012 alone! There's usually - but not always - some sort of vague blue and yellow motif going on, but for the most part The X-Men all just change outfits all the time while their friends and peers in the Marvel Universe are wearing the same things they did 50 years ago. I mean sure, Cyclops has had his little visor thinger, but even that changes shape depending on who's drawing it... and now even that has changed to a big old X on his face, yet he remains recognizable. 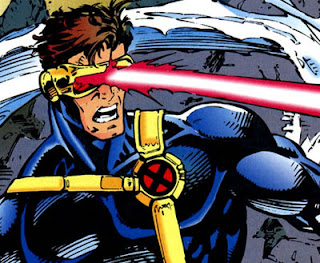 So now I'm left wondering: What is it that makes these characters recognizable when their looks are constantly changing? I mean, there are certain visual cues, like Wolverine's perpetual hat-hair, or the fact that Beast is covered in blue fur... But why is it enough for me that Storm is just the lady with the prematurely white hair who wears whatever she damned well pleases, while I find myself pitching a fit about Green Lantern having his costume become a mock-turtleneck? I mean, I'm probably being unreasonably hard on the Nü52 for erasing the entire history of events that made me care about DC Comics in the first place (where probably = absolutely), but still. The idea that these characters have achieved a place in my heart even when they're wearing exceedingly silly or dated costumes doesn't bother me, and I have no idea WHY. Like, I think Cyclops is kind of intriguing on a conceptual level, but Captain America has been one of my favorite superheroes for as long as I can remember, and I'm still a little salty about that goofy armor he wore in the 1990s, so it's not that I'm more forgiving of Cyclops and his fellow X-Men by virtue of their being somehow more compelling, or more emotionally resonant on a personal level, as characters. They're just superheroes to me.

Could it be because they've just always been inconsistent? Is it really that simple? Am I really that simple? Could the reason I get so bent out of shape over Superman's kneepads be that I'm just comfortable with Superman dressing a certain way, while The X-Men have never given me that sense of steadiness? It's a weird thing to process, because it means that I'm internalizing this shit even more than I thought (and I was already pretty sure I was internalizing it too much). I am a grown adult who makes the gas-face at the idea of a superhero wearing a slightly different costume in a comic book; and while I'm okay with that part of myself, it's apparently taken The X-Men to point out the why and how of the matter so starkly... and I've just now decided that that's part of what makes the X-Men fucking rad.

So yeah. Cyclops has a new costume, and I feel vaguely positive about it... and that has me questioning the very core of my being. Welcome to my blog, lol.
Posted by adhesiveslipper at 1:34 PM 3 comments: