Marvel Reveals "Stomp Out Bullying" Variant Covers, I Have Opinions (AND FEELINGS!)

So a little under a year ago, Marvel announced that it would be teaming with STOMP Out Bullying (an organization with a weirdly violent name, I feel) to release 10 variant covers honoring National Bullying Prevention Month.

Now for some reason the number is down to 7 covers. It feels sort of surprising, especially since Amazing Spider-Man #7 was one of the comics cut from the campaign, and having been one of the most prominent bullied teens in all of pop culture, Spidey would seem to be the most obvious candidate? Ditto for All-New X-Men #33, a comic that is literally about teenagers being harassed by their peers (as well as persecuted by the law, hunted by aliens, and feared and hated by a world that doesn't understand mutantkind, obvs). The three comics that got the bump seem to be getting variant covers that advertise Hasbro's Marvel Legends action figure line* instead, which... I am a dude who fucking loves action figures and ESPECIALLY loves the Marvel Legends action figures, but like maybe choosing an ad over an anti-bullying campaign isn't a good look?

I mean I get it that there was probably a good reason (or a bad one, like artists not meeting deadlines or something) for the change, it just comes across badly to Average Joe Dork a.k.a. ME.

I honestly don't know much about STOMP Out Bullying as an organization, so um here's how they describe themselves:


STOMP Out Bullying™ focuses on reducing and preventing bullying, cyberbullying, sexting and other digital abuse, educating against homophobia, racism and hatred, decreasing school absenteeism, and deterring violence in schools, online and in communities across the country. It teaches effective solutions on how to respond to all forms of bullying. It educates kids and teens in school and online, provides help for those in need and at risk of suicide, raises awareness, conducts peer mentoring programs in schools, creates and distributes public service announcements by noted celebrities, and engages in social media campaigns. An additional focus educates parents on how to keep their children safe and responsible online.
In 2008, the organization created Blue Shirt Day® World Day of Bullying Prevention to signify the importance and bring awareness to the fight to stop bullying and cyberbullying. Taking place the first Monday of October – this year on October 6, 2014 – Blue Shirt Day® World Day of Bullying Prevention is designed as a sign of solidarity against bullying by having kids, teens and adults wear blue and make that the day that bullying prevention is heard around the world.

It's kind of weird that they trademarked the phrase blue shirt day. Also, sexting can be fun if it's consensual! I kid, of course: Bullying and cyber-bullying are extremely important issues and I definitely support any effort to raise awareness. I personally struggled with bullying as a child, and despite my parents' best genuine efforts, it was always an uphill battle for them to get any of the other adults in my life to even give half of a shit about what was going on with their children, in their schools, in their classrooms, on their playgrounds, etc. And as a white straight able-bodied cisgendered man, I can say with absolute certainty that whatever trauma I endured from childhood bullying, I still got off much lighter than a LOT of folks. So please don't take the joke-y tone of my writing to mean that I don't take the issue at hand seriously! I probably won't remember to wear a blue shirt though, and even if I do I might not leave the house anyway.

MOVING ALONG! The current list of comics with the anti-bullying variants is: Guardians of the Galaxy #20, by Stephanie Hans, Avengers #36 by Sean Chen, Inhuman #7 by John Tyler Christopher, Captain America #25 by Kalman Andrasofszky, Legendary Star-Lord #4 by Paul Renaud, and Rocket Raccoon #4 and Hulk #7, both by Pascal Campion.

Marvel has so far revealed 5 of the 7 covers, so here are my Opinions!

Guardians of the Galaxy #7 - Stephanie Hans 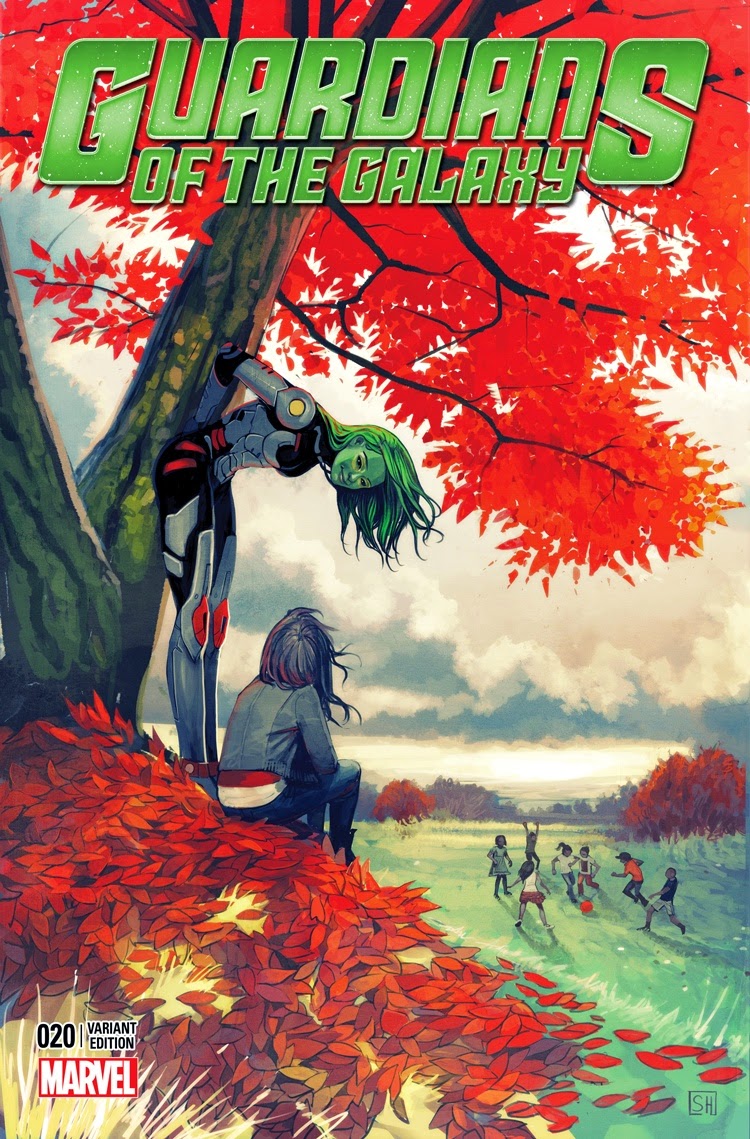 This is a really sweet image and perfect for the campaign, but I can't help but feel like it's an odd fit for GAMORA: THE DEADLIEST WOMAN IN THE GALAXY. Like I mean she is a professional assassin - arguably the greatest assassin ever - and literally murders people without remorse. I understand that the GotG movie has given her a good standing with the kiddos, but in the Marvel Comics Universe she probably wouldn't even be hanging out on Earth? Also I sort of imagine her teaching that little kid the best ways to silently kill off all the other little kids and escape without being caught, and I'm pretty sure that's not what it's meant to inspire. I know I'm being way too literal here, I just think She-Hulk or Captain Marvel might have been a better fit for this cover, is all. Gorgeous art from Stephanie Hans, though. I wasn't really familiar with her work before this, but here is a link to her portfolio page because her art is fantastic! I hope she gets a lot more cover work from Marvel in the future. 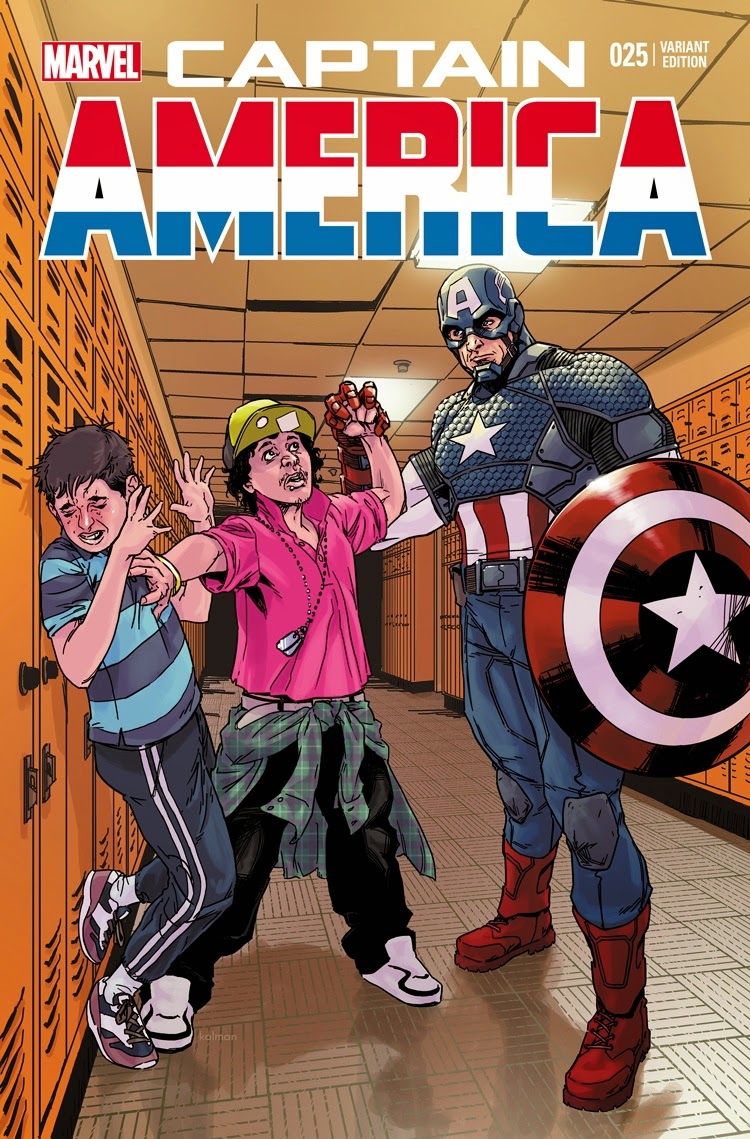 Before I start making fun of this cover, I want to make it clear that I normally think Kalman Andrasofszky's cover work is great. I literally used one of his covers in my very last post as an example of a comic that I absolutely loved, so Kalman, if you somehow end up reading this: My teasing is all in good fun, and I hope that they bring back the X-23 solo series and that you can draw every single cover for it. That being said, this cover is silly. No kid has ever dressed like that in the history of this or any other universe. I mean what is even happening with that outfit? Facial piercings, a snap-back trucker cap with stickers and buttons on it, a pink polo shirt with a popped collar, dog tags, sagged drawers, slip-on kicks, a flannel around the waist, and a Livestrong bracelet? In fact, props to that kid for combining like 25 years of fashion into one outfit. To be fair, highwater track-pants and an ugly shirt is pretty standard for bullied nerds (speaking from experience here). Also I sort of hope Cap isn't about to punch that kid. 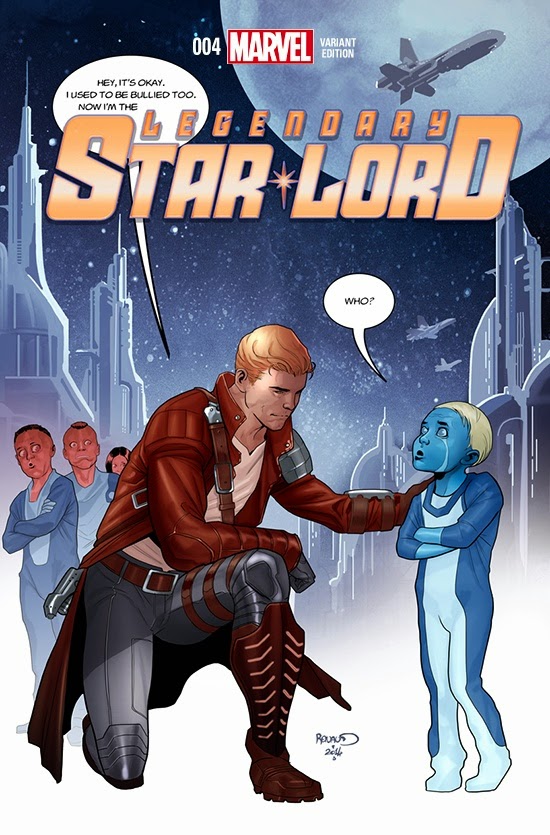 This cover is well-drawn, and kind of funny, but it also is problematic to my nerd-brain. See, Star-Lord's origin story has been retconned, but originally HE was a bully. He was an astronaut who treated his coworkers like shit, and when he got rejected for the position of being the Star-Lord by "The Master of the Sun" he just stole all the gear and ran off to be Star-Lord anyways because he was a dick and he wanted to murder aliens. That was his whole origin story. I mean all that stuff has been tossed in the trash at this point (much to creator Steve Englehart's chagrin, I'm sure) and now Star-Lord is basically Andy Dwyer in Space, but it still feels like maybe Spider-Man would have been a better choice, biggest movie of the summer notwithstanding. 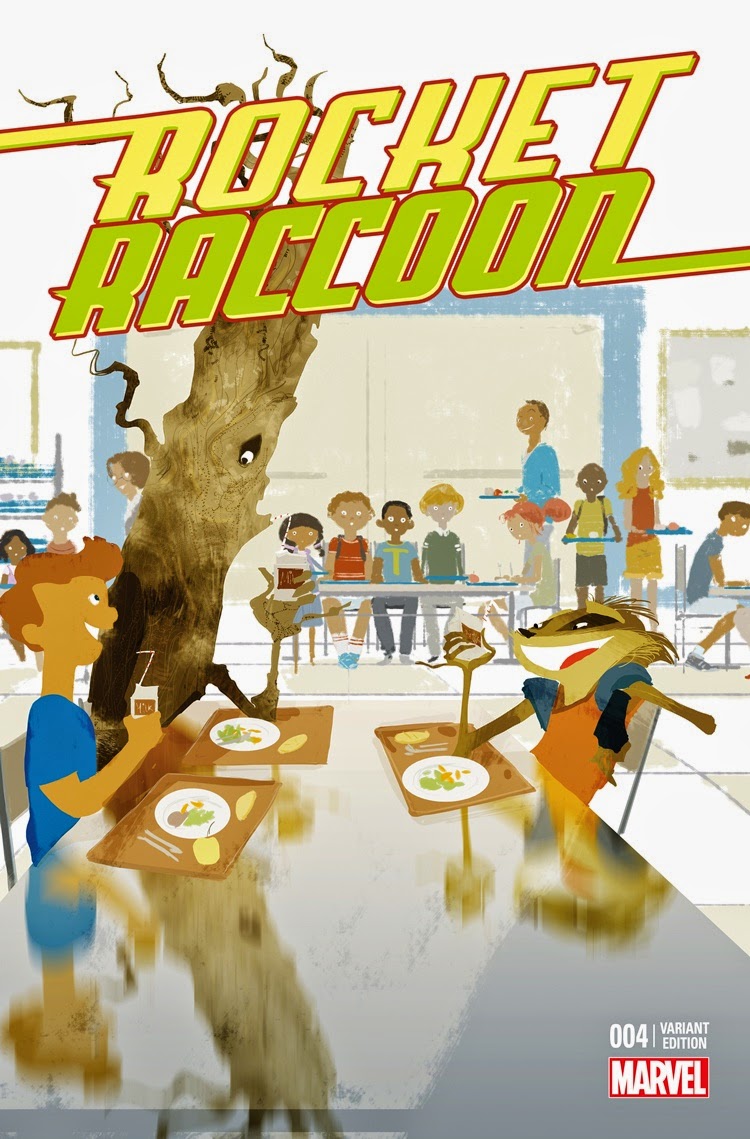 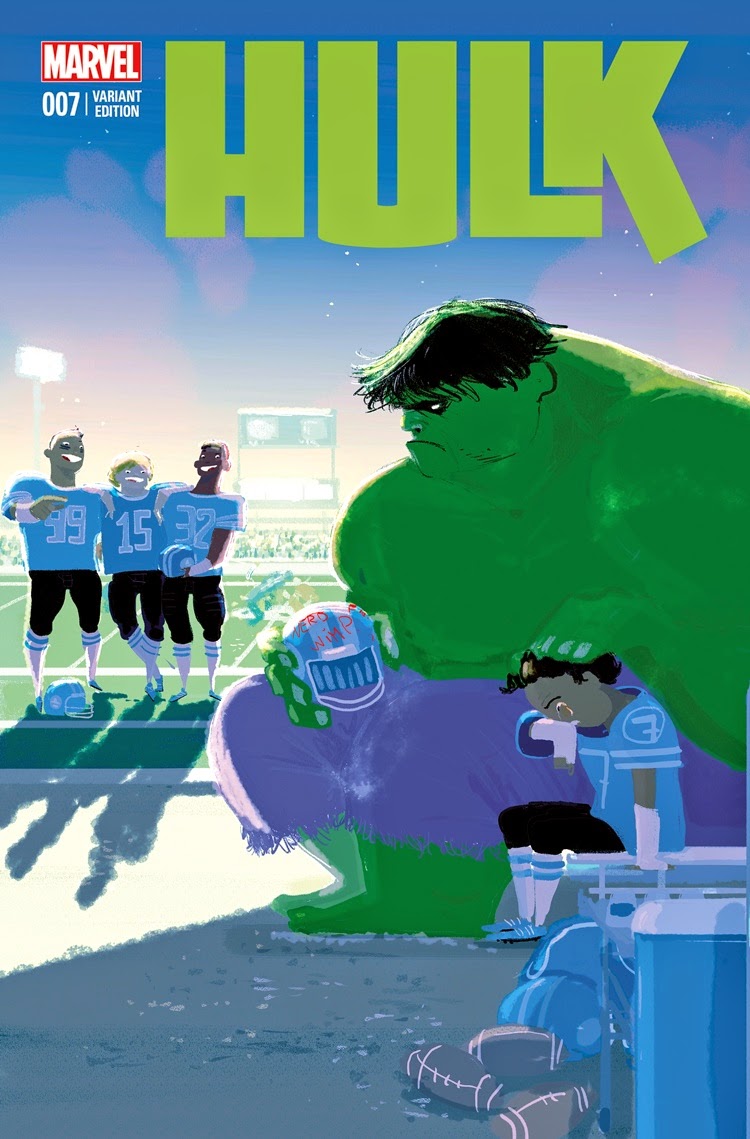 Okay, I chose to end with these two, because there is no snark here: I legit LOVE both of these covers. Groot (the exiled Monarch of Planet X) and Rocky (the exiled Ranger of Halfworld) are both characters that totally understand alienation. And I mean alienation is basically 95% of Hulk's whole schtick... Like, his unofficial catch-phrase has always been "LEAVE HULK ALONE!" I also love that both these covers are taking characters known for extreme rage and violence and using them as nurturers and protectors. Superheroes on the whole spend way too much time solving problems via hitting and shooting, and I really feel like Pascal Campion has managed to push all that aside and show two much gentler images that are no less heroic. Genuinely lovely stuff, and a great reminder that standing up to bullies doesn't always mean learning karate or something. Sometimes compassion is way more powerful.

*I don't want to link to Hasbro's website because it divides their toys into "boy toys" and "girl toys" which I find deplorable. But also I still give them my money on the regular because superheroes. That could probably be another post entirely.
Posted by adhesiveslipper at 4:01 PM No comments: