Gail Simone Got Fired from DC via E-Mail.

So Gail Simone got fired from writing Batgirl, via an email. DC Comics is just such a clusterfuck right now. All of the other writers - the Bat-writers especially - seem pretty pissed. I wonder when the entire company will just be Dan DiDio, Geoff Johns, and Jim Lee jerking eachother off.

I know I've groused about the silly costumes and whatnot in the Nü52, but shit like this is the REAL reason you're not gonna' see me talking about too many DC books on this blog.

She totally got hired back as soon as her fans complained. So there was like one issue that didn't have Simone writing it. But seriously, fuck DC and their editorial staff anyhow. I know Ms. Simone was treated pretty poorly by Marvel, but I still think she needs to get the heck away from DC at this point too. The fact that they have no idea how to treat artists is a major part of DC Comics as an institution.

Posted by adhesiveslipper at 2:08 PM No comments:

Why "Brand New Day" Was Great, Part One: Because FUCK YOU, That's Why! 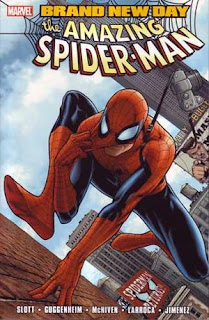 So yesterday I got into even yet still another argument about this, and I figured I should simply put all of my opinions about this particular thing in their proper place, because what the fuck else did I lock down this URL for?

This argument, and literally dozens of previous arguments, was with somebody who claimed to have stopped reading Marvel Comics altogether because of the release of Spider-Man: Brand New Day in 2008, despite never having actually READ Spider-Man: Brand New Day and having many of the details wrong; whether that's by ignorance, misinformation, or stubbornness is hard to say.

Now, I'm a dude who's loved Spider-Man for as long as I can remember. I've suffered some moderately big losses in my life, and yet - and I know this is ridiculous but whatever - the time I lost my Secret Wars Spidey action figure ranks pretty high on the emotional list. Spider-Man holds a pretty important place in my nerdly little heart.

I'm also a dude that usually hates any kind of retcon most of the time, which leads me to constantly make the grumpface when my friends talk about anything related to DC's Nü52 experiment... and that has made for some awkward moments.

However, I think BND is the best thing that could have happened to Spider-Man comics. So I'm gonna' make my case here, and direct anybody else who ever wants to fight about this shit here.

First of all, let's talk about what Peter Parker was up to BEFORE BND happened. I don't know the actual sales figures, but I suspect that many of the people who raged out about this "change to the status quo" hadn't actually read any comics with Spidey in them for at least a few years, because damned near every Spidey story up until BND has been about shaking up the character's status quo, sometimes in ways that were both ridiculous and downright stupid. I'll just throw down some bullet-points here to catch y'all up:
-------

So... That's where Spider-Man was. He was a fugitive from Iron Man's weirdly fascist government regime, he was a mystically-powered totem animal who could talk to ants and shit, he had died, come back to life, and regrown an eyeball, and Aunt May was dying from a gunshot to the gut. THIS is the precious continuity that the people who hate BND with such vitriol were so attached to. Our stage is set.

Tune in next time for deals with the kind-of devil, relationships sort-of not working out, and Spider-Man's return to making jokes!


Part Two: Things Were Great For A Few Years...
Posted by adhesiveslipper at 2:49 PM No comments:

Steve Ditko and THE HORNS 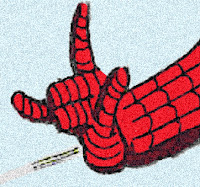 So apparently Steve Ditko is launching another campaign against Stan Lee, and this time he seems to be hinting that he wants to smear Jack Kirby a little bit too.

Now, I'm all for a little inter-creator kvetching, and I love getting insights into the history of superhero comics, but... C'mon, Steve. We all know you're a kooky, reclusive, bootstrappy Objectivist curmudgeon; and we all know Stan's a self-promoting glory-hound nutbag. YOU DON'T HAVE TO KEEP REMINDING US.

I mean, Steve Ditko is very obviously a genius of the comics industry, and has created and/or co-created some of the most intriguing characters in superhero comics. I could probably write an entire essay on The Question and his weird ties to Ayn Rand's philosophy (and Alan Moore's fairly excellent parody of that philosophy in Watchmen), and of course somebody like Spider-Man couldn't be ignored even if you wanted to. 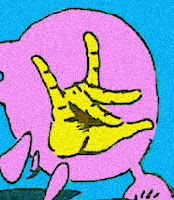 But the real secret scoop I want on Ditko's days at Marvel in the 1960's is... What's up with the "ILY" hands and/or "Devil Horn" hands (he varied on the thumb-placement)??? The fucker has always remained really quiet about that question. The only answer I could find in my MINUTES of research was a quote saying “Because it looks more interesting that way,” and I think that's just BULLSHIT.

His two most recognizable characters at Marvel are both constantly either telling speakers of ASL that they love them, or hailing Lucifer, and I suspect some sort of hidden narrative.

Or, at least, I want to pretend that there's some sort of hidden narrative. In fact, since Ditko remains so staunchly silent about things in general, I'm going to just go ahead and create my own narrative.

I think that whenever Ditko and Lee were having slappy-fights around the office, he'd go and throw a bunch of Satanic imagery into a Spidey comic. Then, later, when he was working on Dr. Strange and feeling more relaxed, he'd have the good Doctor secretly spreading messages of love. And unless Steve Ditko writes to me personally to correct this, I am considering it historically-accurate. Also, fuck Objectvism and bootstraps and all that other stupid right-wing garbage. Fuck it all to hell!

(This blog-post brought to you by boredom and the Fuck Objectivism to Hell Foundation.)
Posted by adhesiveslipper at 1:28 PM No comments: