So Comic Book Resources has released the variant covers for Mark Waid's upcoming Agents of S.H.I.E.L.D.﻿ comic, and like... Ming-Na Wen﻿ versus the Marvel Universe is something I have VERY GOOD feelings about, you guys.

Posted by adhesiveslipper at 8:43 PM No comments:

So here is something I truly hate seeing repeated in the narrative of superheroes:


"I love you, and that is why WE CAN NEVER, EVER, EVER BE TOGETHER."

It always is presented by the superhero character as somehow protecting the love-interest character (who is basically always female) from harm, but I always read it as an admission from the writers that they don't know how to write romance, and therefor know that if they allowed an actual romance to blossom it'd fall short and bore the audience and ruin the characters. It's like the writers themselves are trying to protect the love-interest character from all the horrible things they'd do to her (all of which would require a Trigger Warning) within the story to avoid having to actually write convincing dialogue for a couple.

It also always results in these situations where the male character is telling the female character - in effect - that her status as supporting cast is going to force her to be handy at all times for his unreasonable requests, emotional development/daddy issues, convoluted webs of lies, and occasional awkward makeouts, and that she just needs to deal with that because she is less important to the narrative. This happens in real life, and it is called abuse. I will be glad when it stops turning up in my comics/movies/shows/etc. 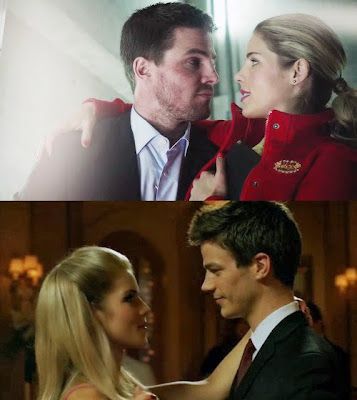 Felicity needs to find and hook up with Firestorm's Dad, is what I'm saying here.

Who is YOUR favorite FUNCTIONAL comic book couple???

lol
Posted by adhesiveslipper at 3:52 PM No comments: