Hi! So... I went away for another couple of years. I am not great at being consistent!

HOWEVER, I have a thing I want to write about! It's going to be a SERIES, even!

See, I usually pride myself as somebody who is mega up-to-date on superhero comics. But I have fallen almost a year behind on the stuff that Marvel is releasing! Suddenly Cap is in HYDRA, Civil War II is getting fired up, and my friends have questions for me that I can't answer! I KNOW, HOW EMBARRASSING!

The truth is, I got a little burnt out by Secret Wars. This is not to say I didn't enjoy Secret Wars, because I actually thought it was amazing. It capped off Jonathan Hickman's genuinely-epic multiverse-spanning storyline - that started wayyy back with his first issue of Fantastic Four in 2009 and then ran through FF, Avengers, and New Avengers over the next 6 years - in the perfect way. But it was also HUGE. There were eighty-bajillion tie-in miniseries that I still haven't finished making my way through. There were delays and shipping conflicts that led to new books being launched while, as far as anyone reading Secret Wars knew, there wasn't even a Marvel Universe for them to take place in. It all turned into a big, confusing, stressful mess for me, so when Marvel officially rolled out their All-New, All-Different Marvel relaunch... 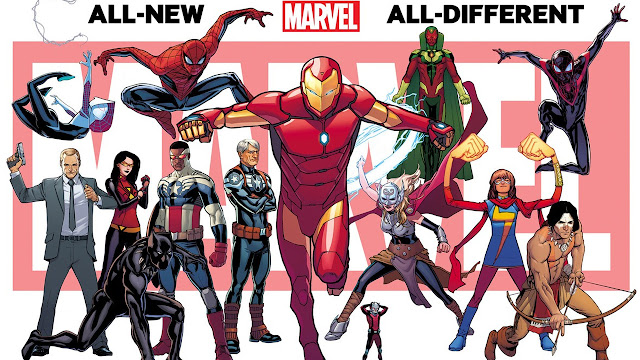 ...I got left behind. I ended up rereading John Ostrander's entire Suicide Squad run when I could have been catching up with Marvel (though that was worth it because god I love that comic). Image caught my attention with some new books. I started hanging out with DC a little bit. There were a few Marvel books that I kept up with - Howard the Duck, for example - but I've stayed away for the most part, and WITH NO GOOD REASON! A lot of the books Marvel was doing seemed REALLY FUN!

So here is my big idea: I want to get caught up on this stuff, and I want to bring y'all along for the ride. I know that many of my friends really like to follow along with their favorite characters, but don't necessarily have the time or inclination to read all the comics that come out. Well, I have time to read comics. I have time to write about comics. I even have a blog about comics, that mostly just sits around taking up space in the tubes of the internet. So I will read the comics, and write to you about those comics, on my blog about comics! I will call it...

I was gonna make a logo to put there, based off the old Marvel Team-Up comics, but then I remembered that Marvel Team-Up had literally the most boring logo of all time. Like, seriously? Nobody could do better than block letters? This comic ran for YEARS. Ugh. It's how I used to write band-names on my notebook when I was twelve.

Now I just have to decide if I want to read these comics in alphabetical order, or in what-do-I-feel-like-reading-next order. Or maybe I could take requests? I dunno.

Anyway, that is my idea.


But Adhesiveslipper, won't I have to read Secret Wars first? This was supposed to be a reboot of the entire Marvel Universe, wasn't it?

Nahhh. Marvel is too smart to reboot their whole universe. Mostly Secret Wars was just an excuse for Dr. Doom to be God for a while, and for writers and artists to do some fanciful miniseries set in the weird context of Dr. Doom's Battleworld. The only significant change is really that the "Ultimate" line of Marvel comics got cancelled, and a few important characters from there made the jump over to the main "Earth-616" Marvel Universe. So besides the fact that there are now two Spider-Men running around (Miles Morales and Peter Parker, if you're WAY behind), things are pretty much the same as they were before. If there's anything important from Secret Wars in a specific comic that bears mentioning, I'll fill you in. I'VE GOT YOUR BACKS, FRIENDS.
Posted by adhesiveslipper at 12:13 AM