So this came up in my Facebook "On This Day" thinger and I thought it was worth sharing here: 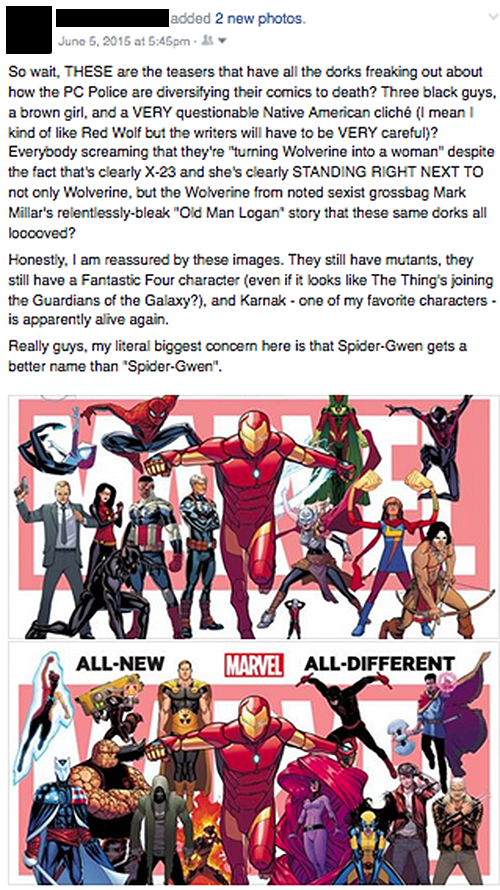 I had actually forgotten that the teaser images for All-New, All-Different Marvel caused a minor ruckus amongst the Angry Twitter Whiteboy crowd, who are ever-eager to label anything and everything an example of political correctness run amok. I'm glad I got the reminder, because that will provide a useful lens to view these comics through. Was it even an actual attempt to be more diverse at all? If it was, did it succeed in any meaningful way?

I had also forgotten about the fear at the time that Marvel/Disney was going to use the minor rebranding to further distance itself from properties whose film-rights belong to Fox, namely the X-Men. It was a fear I shared, to an extent (X-Tent?). It didn't turn out to be the case at all, really, but it's another useful reminder of the feelings people had about the fate of the Post-Secret Wars Marvel Universe at the time.

Oh and for the record: According to dudes on Twitter I am already officially a SJW, a Beta Male, a White Knight, a Try-Hard, and a badge-carrying officer of the PC Police. Just so we all know where we stand on this whole "diversity" thing!

So wait, THESE are the teasers that have all the dorks freaking out about how the PC Police are diversifying their comics to death? Three black guys, a brown girl, and a VERY questionable Native American cliché (I mean I kind of like Red Wolf but the writers will have to be VERY careful)? Everybody screaming that they're "turning Wolverine into a woman" despite the fact that's clearly X-23 and she's clearly STANDING RIGHT NEXT TO not only Wolverine, but the Wolverine from noted sexist grossbag Mark Millar's relentlessly-bleak "Old Man Logan" story that these same dorks all looooved?

Honestly, I am reassured by these images. They still have mutants, they still have a Fantastic Four character (even if it looks like The Thing's joining the Guardians of the Galaxy?), and Karnak - one of my favorite characters - is apparently alive again.
Really guys, my literal biggest concern here is that Spider-Gwen gets a better name than "Spider-Gwen".


Posted by adhesiveslipper at 5:52 AM