Okay, I'm gonna level with you: This has been a pain to write. Honestly, sometimes I am terrible at writing about comics that I straight-up enjoy. My first instinct is to just say "It's great, you should check it out," which doesn't make for a very interesting blog post.

So with that being said, let's take a look at the flagship title of the post-Secret Wars Marvel Universe; All-New, All-Different Avengers. 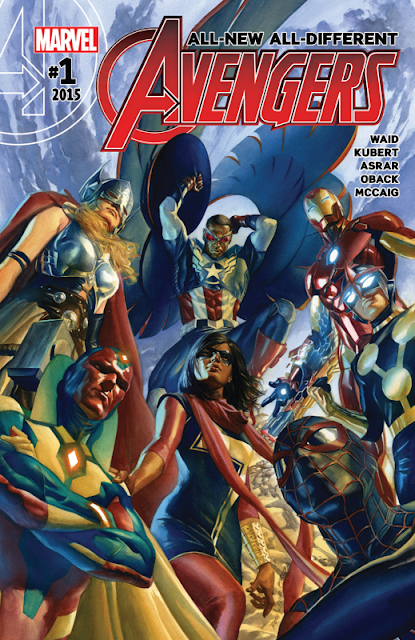 So, the first thing one notices is that more than half these characters are NOT actually all-new to Avenging. Even the new Thor's got some experience with the team at this point.

Well, that's not entirely true. The first thing I noticed was the cover, because I have always been a big fan of Alex Ross and his fancy paintings. I know that sometimes his layouts are a little weird and often tend to be centered on a character's junk (case in point: the above cover to issue #1 which definitely started with Cap's dick and spiraled outward), but ever since Marvels first came out in '94 I've just really liked the guy.

One thing I've always enjoyed about Alex Ross is his love for the history of comics as an art form, and he's really putting that on display with his cover work on this series. It all hearkens back to the days when a comic's cover was meant to SELL; and if they had to get a little abstract, throw in some extreme hyperbole in the text, or even just go ahead and include things that don't even happen inside the issue, well that was just fine.

I honestly couldn't choose which cover best illustrates (oh shit, unintentional pun) what I like about these covers, so I'mma just show you all 12 issues he's done so far and you'll need to deal. 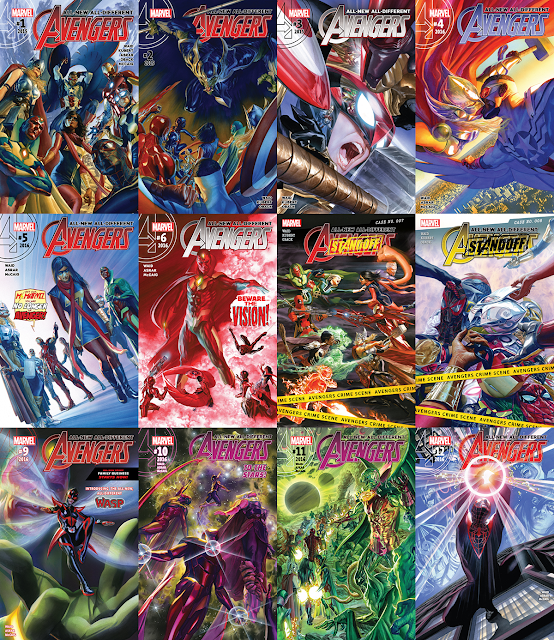 All-New, All-Different Avengers is being written by Mark Waid, whom I love. He's written some of my favorite comics, and I honestly can't think of any full-on shitty comics that he's done. I actually feel like I spent a bit too much time in my post about Agents of S.H.I.E.L.D. lamenting the fact that he wasn't writing that comic anymore. His dialogue is always on-point, he never seems to fuck up on the minor details of a giant comic book multiverse, and he always manages to leave characters more interesting than they were when he found them.

The art on the book seems to bounce back and forth between Adam Kubert and Mahmud Asrar, with Kubert handling anything "big" like a crossover tie-in, and Asrar doing the "regular" issues in-between. Honestly, I prefer Asrar's work in this series: It's very expressive, and makes everything feel BIG, which is exactly what I want to see from a company's flagship title. I don't really have any problems with Adam Kubert's work, but I don't like the cognitive dissonance I feel when a comic bounces back and forth between artists, and I can't help but think that Marvel just wants a more famous (and possibly whiter?) name on the cover of issues that they deem capital-I Important. Asrar's art just fits this comic, in my literally-never-humble opinion. 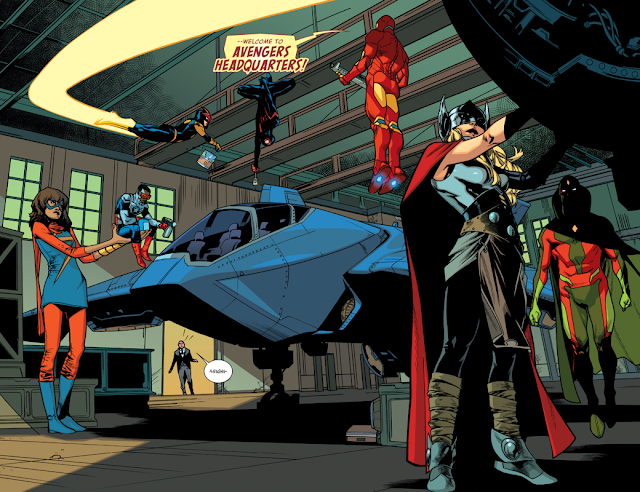 Plotwise, this series feels very... classic Marvel? Hard-luck heroes banding together and fighting against the odds, etc. The story starts as any new Avengers story should start: With a villain showing up out of the blue and every hero within spitting-range showing up to battle them. This time it was... some Chitauri guy from Nova's ongoing series that I haven't been reading? With a much bigger villain pulling his strings, but I'm trying not to be spoiler-y up in here.

There are two major twists to this new band of Avengers. The first is that they have no money. Tony Stark is broke and they are operating out of an old airplane hanger with exactly one Quinjet. Instead of a mansion, they have a break-room. Instead of a kitchen, they have a hotplate. Yet Jarvis, ever-loyal, is still around... more for moral support than anything else. The second twist is that there is a group of teenagers on this new team, and some of the oldsters are not fully okay with that. While characters like Ms. Marvel and Spider-Man are clearly capable of holding their own in a fight (and also holding down their own solo series), it's a learning process for people like Iron Man and Captain America to work with a group of non-sidekick teenagers. It does make the adult heroes seem a bit fuddy-duddy at times, but I still think it creates a neat dynamic. It also allows for a certain degree of teenaged bickering, which was kind of a founding concept of the Marvel Universe in the 1960s. 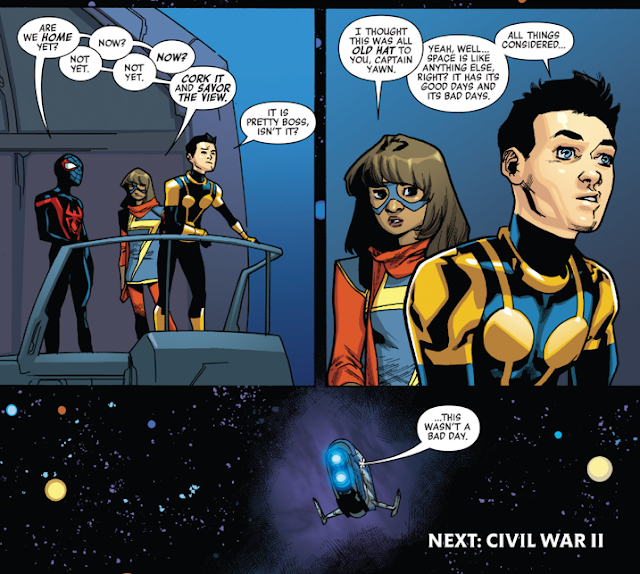 One thing I should address here is that, right in the middle of the series, we had to get yanked out of the ongoing plot to deal with Avengers: Standoff! I think this might become a recurring theme in these blog posts, as I cover the state of the Marvel Universe in the wake of Secret Wars. So I feel like I should make it clear that... I didn't like Avengers: Standoff! I even resent having to use that damned exclamation point.

Firstly, I hate crossovers that require characters to drop what they're doing in their own comics and relocate someplace else. It brings a story's momentum to a screeching halt. In this respect - for all the distaste I have for it - Civil War II is actually quite a bit less intrusive. The characters can have feelings and opinions and conversations about the issues being raised in the main Civil War II book without actually stepping away from what they were doing.

Secondly, Avengers: Standoff! hinges on something that has really been rubbing me the wrong way the past couple years: Ever since the 'death' of Nick Fury, S.H.I.E.L.D. has been run by a woman (Maria Hill), and during that time it has also frequently turned into a group of above-the-law fascist creeps who are fucking around with Cosmic Cubes and detaining and mind-controlling people without trial and blah blah blah, and like... It just feels a little sexist to me. It feels like they're saying a dude can run a massive international peacekeeping organization and everything will mostly be fine, but give the reins over to a woman and things are gonna' get completely out-of-hand within months. I'm probably just reading too much into bad writing, but it's hard to shake the icky feeling.

So from now on when I refer to Avengers: Standoff! I might keep it brief... possibly even brusque and dismissive in tone... and that's why. Also it was boring, and was mostly just a big con to make Steve Rogers young again and also a Nazi. Whatevs. 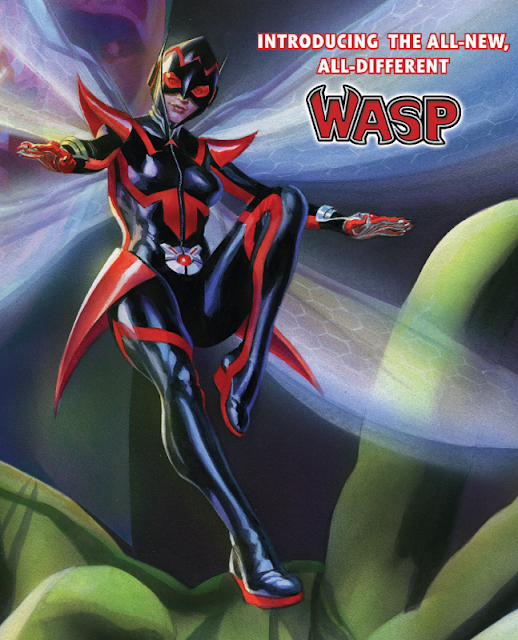 ANYWAY. I know I'm blowing past huge chunks of the story here, but this comic has so many big plot twists and revelations that almost anything I gave away would take all my readers to Spoilertown. I really just want all of y'all to read this comic, because it's really good. So the last thing I want to talk about here is the introduction of the Avenger's eighth member: a brand-new Wasp.

Nadia Trovaya is apparently Hank Pym's long-lost, thought-dead, Russian daughter. She's a genius inventor who was apparently put through the Red Room Program until she was able to escape and flee to America, where she assembled a super-suit from her father's old gear and introduced herself to the Avengers, which is when we as the audience meet her.

There isn't much to the character yet, as she's only been around for a couple of issues and it's an ensemble book, but I think that backstory is killer, and could lead to a lot of interesting stories down the line. Superhero comics can never go wrong with a shady past in international espionage. We've also gotten a fun scene where Jarvis drives her out to meet Janet Van Dyne (the original Wasp, whom she views as the stepmother she never met), and they spend the day getting to know eachother.

I have high hopes for Nadia. I also worry that as soon as she passes out of Mark Waid's hands, some other writer will chuck her under the bus. But that's how it goes for comics fans.

I was originally going to end this post there, but this week All-New, All-Different Avengers Annual #1 dropped, and OH MY GOD it is so much fun. 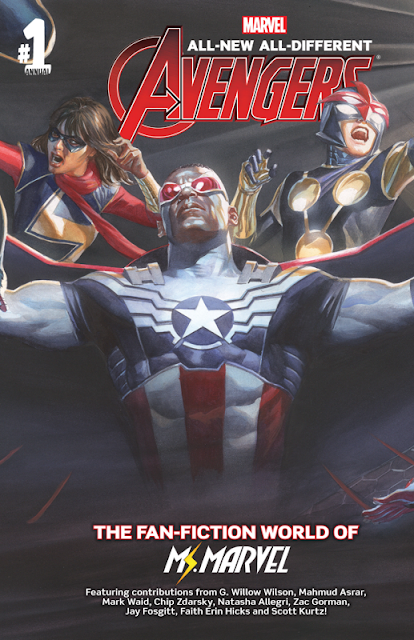 This is literally an entire comic about Ms. Marvel going online and reading fan-fic about herself... something she never expected she'd have to deal with, until becoming an Avenger.

Each story is just an illustrated piece of crappy internet fan-fic, with occasional angry commentary by Ms. Marvel. It really captures everything that's fun about the character in a very clever way, and if I hadn't already made it clear by now, Ms. Marvel is totally one of my favorite characters.

Marvel Catch-Up #0: The Introduction
Posted by adhesiveslipper at 3:55 PM