For those who may not know, the previous Fraction/Aja Hawkeye series was a fan-favorite, critically-acclaimed, award-winning, just-plain-great comic book. It was not only one of my favorite recent comics, but one of my favorite comics ever.

Now I don't usually put this hat on when I'm writing about comics, but I am a performer. And as a performer, I hatehateHATE going onstage after somebody who just rocked so hard that they blew me and the audience away. I know it probably should inspire me and make me want to step my game up, but to be honest it usually just makes me want to go take a nap.

So when I approached All-New Hawkeye, I sort of did so with a mindset of "As long as they don't totally fuck this up and kill off all the characters or something, I will feel positively about this comic."

I think that about sums up how I feel about All-New Hawkeye: They didn't fuck it up. It didn't blow my mind, but it was a perfectly serviceable comic about the extended Hawkeye family. And that word "family" is probably about the best lead-in I can muster, because that's what they chose to make their story about.

See, there isn't just one Hawkeye nowadays. There are three. Obviously, there's Clint Barton, who you may only know as sexist asshat Jeremy Renner playing the most weird, pointless, and boring character in the Marvel Cinematic Universe... but who is a longstanding Avenger and a pretty okay guy once you spend some time with him in comic-form. There's Kate Bishop of the Young Avengers, a wealthy mob heiress who took on the Hawkeye mantle during a time that Clint Barton was dead (it's comics) and managed to win over the superhero community with both her attitude and skill. And there's also Barney Barton, Clint's sometimes-villainous older brother who recently went by the name Trickshot, but also spent some time as the Hawkeye of the Dark Avengers after Bullseye abandoned the role (again, comics).

Lemire decided to tell a story about these three Hawkeyes that weaves through their entire lives, flashing back into their childhoods and flashing forward into their (possible) futures. What could arguably have been just a story about the Hawkeyes fighting HYDRA was instead turned into a meditation on their origin stories, their goals, and their relationships to each other. It was quite nice, and Ramón K. Pérez did a fantastic job of keeping these different timelines visually distinct. It was powerful stuff, and would make for a solid introduction to the characters for a new reader, which can be a pretty important thing. In fact, if you're not super-familiar with Hawkeye as a character and you don't feel like doing a whole bunch of research, I'd definitely recommend this series to you.

My only real complaint about the series is that the story spent so much time in the past and future that it didn't do much for the characters in the present. Like... Kate maybe wants to explore her identity as a solo superhero instead of a sorta-sidekick or a member of a super-team, but really the story left the three main characters more or less exactly where they were at the start of the story. And in my opinion, that's not ideal storytelling for a serial medium. 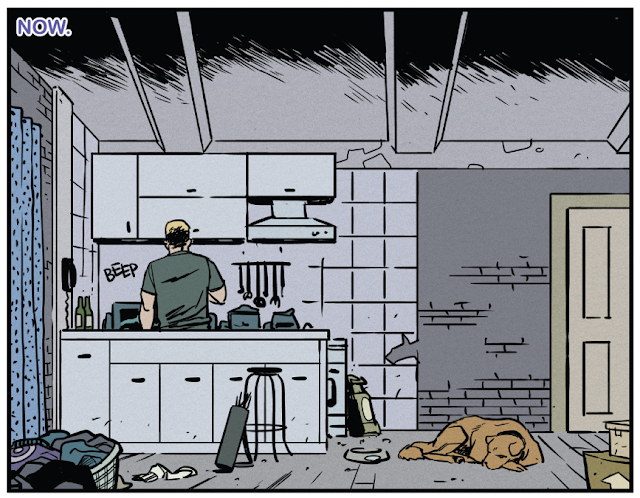 My other complaint about the series is not at all the fault of the creative team, and is something that will come up again during my exploration of the "All-New, All-Different" Marvel Universe: The damned re-numbering. 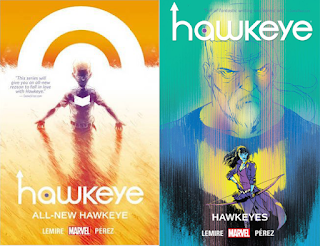 There was zero reason for this series to be renumbered, aside from some weird ideas about what fuels comic book sales. It is a perfectly coherent 11-issue story that can be read in one sitting. All this kind of shit will do is baffle new readers, the very people this story is perfect for. So I'm going to do something I try to never do on this site, and advise you to skip right over the single issues and buy the comics in trade-paperback form. Nobody's got the time to sort out if they're reading the FIRST issue #3 or the SECOND issue #3, it's bullshit, so just go to your local shop and grab the paperback collections.

I might be harping on this too much, but as I said, this is going to be an ongoing problem in these reviews, so I might as well get the rant out of my system. Like, what in the world does Marvel think they'll get out of this? It's not the 1990s: Most people have gotten past the "First issues are a financial investment!" scam. All I can think is that they're trying to make these comics SEEM like they're friendly to a new reader by plunking the number one on the cover, when really those new readers will be dropped into the middle of a story-in-progress, and that is both dishonest and shitty. And that's what makes me the angriest. It's not just an inconvenience to nerds like me; I'll keep reading these things for as long as they keep publishing them. BUT. It could potentially alienate a brand-new comics reader, and we all need those people if we want this whole comic book concept to continue.

That rant aside, I quite enjoyed this series, and am sad to see that it got cancelled after the first eleven issues. I don't know that anything will compare to the series preceding this one, but this one still had a solid foundation and could have gone someplace interesting if it was given more of a chance. As it stands, though, it's a nice user-friendly little book with a beginning and an end, and I suppose that's a good thing in its own way.

Marvel Catch-Up #0: The Introduction
Posted by adhesiveslipper at 10:11 PM