OKAY Y'ALL TSUM TSUM IS HAPPENING

So a couple weeks ago my wife and I took a trip to The Mall of America, and while at the Disney Store we spotted these adorable-but-strange little stackable pill-shaped toys called "Tsum Tsum" (which I assumed to be Japanese onomatopoeia for "Zoom Zoom" because they look like tiny missiles, but is evidently a shortened "tsumu" which means "to stack") and we were both equal parts baffled and amused.

They've apparently been around a couple years now. The Disney Store had them in several sizes, and they ran the full gamut of every Disney property. It probably goes without saying that I was immediately drawn to the Marvel Comics ones, but c'mon. They had a wee little Captain Marvel! She-Hulk! HAWKGUY! They were marketing the heck out of these little things, with everything from t-shirts to posters to like, flatware and school supplies... often amusingly with Soulja Boy reference "Stacks on Stacks on Stacks" printed on 'em.

So why am I covering these on my comics blog? Am I just trying to get Disney to send me free stuff? YES, PARTLY. But also, Marvel Comics dropped Marvel Tsum Tsum #1 yesterday, and the comic is evidently taking place in THE CORE MARVEL UNIVERSE! And friends, that is the greatest thing. 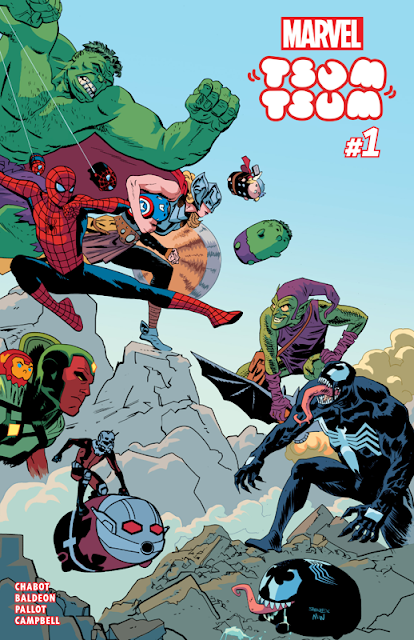 Here is a summary, from the official Marvel website:

In case you’ve been living under a rock, Tsum Tsums are HUGE! Well, not LITERALLY (they’re actually pretty tiny) but these seemingly cute and cuddly creatures are sweeping the globe! So what happens when these pint-sized piles of fur find their way into the Marvel Universe? After a crate of them falls to Earth en route to THE COLLECTOR, one small group of Brooklyn teenagers will find out! Featuring all of your favorite Marvel heroes and villains, this is sure to be TSUM-thing you won’t want to miss!

So that about covers the plot. The story opens with the Guardians of the Galaxy diverting a shipping lane to make way for a space-turtle migration. A space-crate falls off a space-truck, somehow eventually lands in NYC, where it's found by a group of geeky, superhero-obsessed kids. When they open it, they discover a pile of blank(?) Tsum Tsums. 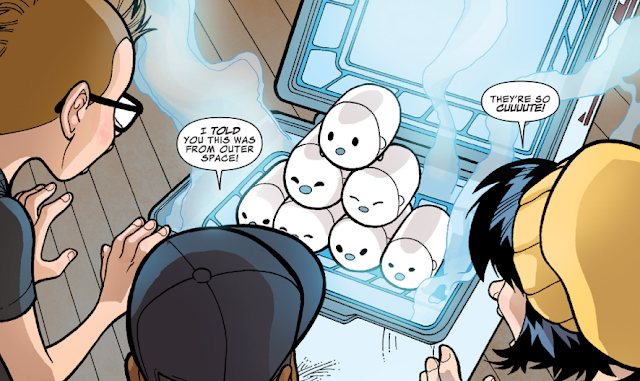 Very soon after, the Avengers come crashing through fighting Ultron, because living in Marvel NYC is probably a never-ending nightmare, and the Tsum Tsums immediately mimic the forms of the heroes (though not always accurately: the Thor Tsum Tsum inexplicably takes the form of the classic Donald Blake Thor, even though it has only seen the current Jane Foster Thor?) and begin wreaking ADORABLE HAVOC. 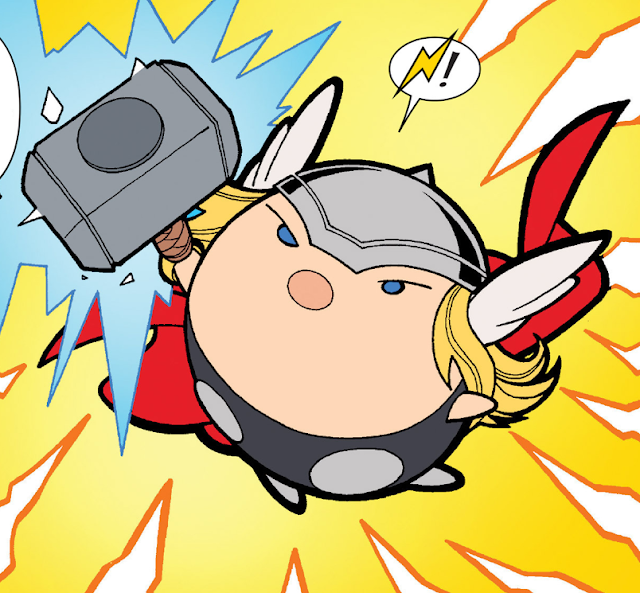 The kids rush around trying to collect their newfound alien pals, eventually luring them back into their apartment building with various Classic Marvel Moments™ that they have stored on their smartphones, which the Tsum Tsums apparently find soothing. They think they've rounded them all up, but - PLOT TWIST - oddball, meteor-obsessed supervillain The Looter also lives in the same apartment building and HAS STOLEN THE SPIDER-MAN TSUM TSUM FOR NEFARIOUS PURPOSES. OMIGOSH!

Obviously, I find all of this absolutely amazing, and I hope this comic goes on forever and has a Civil War II tie-in issue and becomes at least as major a fixture in the Marvel Universe as the Micronauts or ROM: Spaceknight, and yes I am 100% serious about that. A lesser company, and a lesser creative team, would have stuck these little guys into their own cutesy little book; but in the grand Marvel marketing tradition, the Tsum Tsums have instead been plopped straight into Marvel New York, given a diverse and clever supporting cast, and started fighting bad guys. I love that. So. Much.

Thank you Marvel, for always keeping things ridiculous and wonderful.

Posted by adhesiveslipper at 12:08 PM